Holiday in Kastelruth: a lot of nature, culture and specialties await you

For guests who like to spend their holidays in South Tyrol, a holiday in Kastelruth is one of the most beautiful holiday moments.

Kastelruth is best known for his long peasant culture. The history of many farms in Schlern area dates back to the 13th century. Next to the parish church one of the outstanding attractions in Kastelruth is the Spatzenmuseum, where you can get detailed information about the Kastelruther Spatzen.

Enjoy nature during a summer holiday in the Dolomites

Almost half of the municipality includes the Seiser Alm, Europe’s largest plateau, with an area of 56 square kilometers. This is the biggest closed plateau in the Alps and is bounded by the Rosszähnen

the Roterdspitze and the Schlern. Thanks to the variety of flora that you can marvel during your holiday in Kastelruth, the Seiser Alm is classified as a conservation area. The southern parts of the plateau are part of the Natural Park Schlern-Rosengarten and is characterized by swelling marshes, meadows and pastures.

Holiday in Kastelruth: discover the sights

For nature lovers, the Marinzenalm is a trip’s worth. This is at an altitude of 1,500 meters above sea level and can be reached within a few minutes by chairlift from Kastelruth, for the guests tickets are for free. Directly at the Marinzenhütte you can relax during a summer holiday in the Dolomites on the sun terrace. Only about 15 minutes walk, directly at the witches chairs, is also located the quaint Schafstallhütte. If you spend the holidays in Kastelruth with your children, on the Marinzenalm a petting zoo, a playground and a fishing pond, where they are allowed to fish, wait for you. Hikers can explore the world of the Dolomites during a holiday in Kastelruth.

To the most famous citizens of the town, namely the Kastelruther Spatzen, is dedicated even a museum in the village. In the Spatzenmuseum you will learn all about the Kastelruther Spatzen. 1990 they celebrated at the Grand Prix of Folk Music one of their greatest successes, as they won with the song “Tränen passen nicht zu dir”.

Among the most famous attractions of the place there is the parish church of Kastelruth, which was probably built in the early Middle Ages. It has the third highest church steeple in South Tyrol.

The characteristic landscape, you can enjoy and discover during your holiday in Kastelruth, is characterized by the numerous traditional and often historic farms. On the Pflegerhof, for example, where more than 500 varieties of aromatic and medicinal plants are cultivated, you even have the opportunity to know closer the typical peasant living culture in South Tyrol.

As food lovers you should not miss the visit to the Knödelfest (dumpling festival), held every year in July. There you will find a variety of typical dumpling specialties from South Tyrol. Friends of folk music are welcome at the Spatzenfest in October. In addition, the Kastelruther Spatzen perform annually in June during the Kastelruther Open Air.

Send us your feedback!
...more 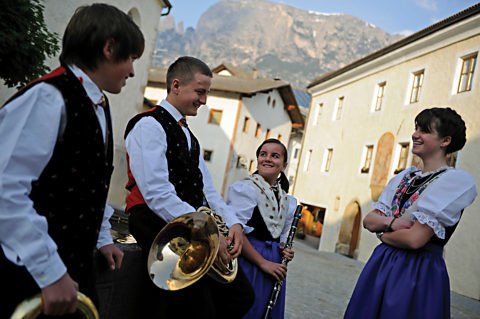 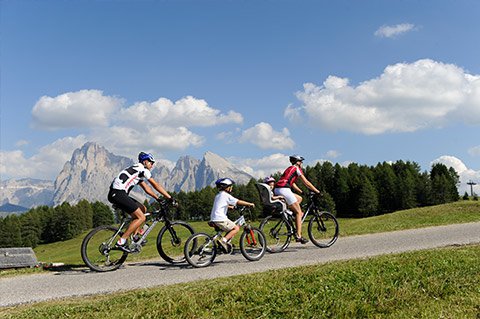